Here are some of my favorite cake finds from pinterest:

Wedding cake with the poem, I Carry Your Heart, by EE Cummings.

Granted these pancakes sure do have a long name they are actually really good. This recipes comes from How Sweet Treats. They give you step by step directions along with photos. Check out their site as well as the recipe below:

1. In a large bowl, combine flour, baking powder, sugar, salt, cinnamon, and nutmeg in a large bowl. Measure out the milk and add the vanilla extract to it. Whisk together the dry ingredients and add in milk and vanilla, stirring to combine. The mixture will still be dry. Add in mashed bananas and mix. Add in melted butter and stir until batter is somewhat smooth.
2. Heat a skillet or grilled on medium heat. Using a 1/3 cup measure, spoon batter into rounds and cook until bubbles form on top – about 2-3 minutes. Flip and cook for a minute or two more. Repeat with remaining batter. Serve hot with butter and syrup, or the vanilla maple glaze. 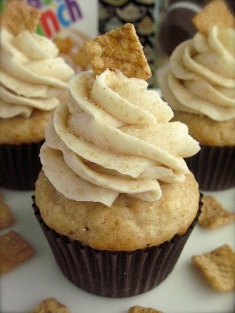 Yes, you read right: Cinnamon Toast Crunch Cupcakes. I’m part of this fabulous website Pinterest. It’s a virtue pinboard where you can pretty much find any kind of recipe, how to, craft, party idea, even invitation ideas. I L-O-V-E it. All of my recipes have come from here along with various cook books. Recently I found this recipe.

Your Cup of Cake is by far one of the best cupcake websites out there. I found this Cinnamon Toast Crunch Cupcake recipe along with many others, but this is one that I’m most likely going to try. Check out the recipe below.