So, it seems to me that I’ve been gone for a quick minute….almost. I’ve been so busy with school and work I haven’t had time to update my blog, BUTTTTTT I have been on Pinterest.

That could only mean one thing….come find me and follow me. I have over 15 thousand pins (I can safely admit I have a problem) and over 42 thousand followers. I have lots of cooking/baking boards as well as drink boards because every one loves a good beverage now and again. Plus there’s lots of other things I love!

Margarita Cupcakes, who knew? Since tomorrow is Cinco de Mayo I thought I’d post a few more fun recipes I’ve discovered and came across. I’m not a big Cinco de Mayo celebrating for a number of reason: I do not enjoy Spanish food even though I’m Puerto Rican and I don’t drink…so it’s kind of like another day in my book. Anyways, back to the recipe. I saw one of my friends made these cupcakes for a party she’s going to tomorrow and she had a lot of fun making them. Check out Recipe Girl’s website for step-by-step instructions that include pictures as well as other recipes.

I feel like everyone responses well to alcohol related recipes. Courtesy of The Family Kitchen they provide an easy JD Chocolate Cake recipe. Check out their site as well as the recipe below:

1. In a double boiler, or in the microwave, melt butter and chocolate together. Stir well. Let cool.
2. Add butter and chocolate to a large mixing bowl with sugars. Mix until well combined. Add whiskey and mix well. Add eggs, one at a time, until incorporated. Mix well. Add salt, baking soda and baking powder. Mix very well. .
3. Pour into 4 pint jars that have been sprayed well with non-stick spray. Bake at 350 degrees for 30 – 40 minutes, or until cakes pass the toothpick test. (And they have risen and fell)

1. Cream softened butter and shortening in stand mixer with wire attachment.
2. Add sugar. Mix on low until combined. Turn mixer to high. Add a little of the milk or whiskey at a time, until icing is light and fluffy.
3.  Refrigerate until ready to use.

Yesterday, I was happier than a bird with a french fry! I met Buddy Valastro of TLC’s Cake Boss. I’m a HUGE fan. I live not to far from him bakery in Hoboken and I have been there a few times. I would go more often except with his new found fame the lines are exceedingly long. The normal wait time just to get into Carlo’s is around 4-5 hours. As much as I love, food waiting on that line is painful.

I went to the Chocolate World Expo  and it was FABULOUS! Everything a girl could want and more. There was tons of chocolate samples, as well as ice creams, cookies, brownies, fondue, cheeses, and of course wine!

My top favorite’s included (in no particular order):

Overall, the chocolate expo went well especially around the waist. I ate so much junk food, but learned so much about my taste buds. All the different flavors..ah! It was so much fun.

Visit Taste for Adventure to find the recipe as well as other fun stuff. Check out the recipe below:

Courtesy of Bakers Royale they give you a step by step instructions on how to make these fun shooters.

Courtesy of Smitten Kitchen‘s blog they give a photo detail of how to make a Porch Swing. Check out their site as well as the recipe below:

Pour gin, Pimm’s and lemonade into tall Collins glass, then add a few ice cubes and a splash of 7-Up. Finish with cucumber slices.

1 part freshly squeezed lemon juice
1 part simple syrup, or to taste (I will use perhaps 1/2 or 3/4 of a part next time, see Note above)
2 parts water

Make simple syrup: [Please don’t buy it. I see it in stores and it vexes me.] Simmer one part water with one part sugar (I did a cup of each and ended up with about 1 1/2 cups simple syrup) until sugar has dissolved. Let cool. Or, you can use my speedier method where you simmer one part sugar with half as much water and once it has dissolved, add the second half of the water, cold, which cools the mixture down faster (when you like nothing to slow your pace to the nearest drink). 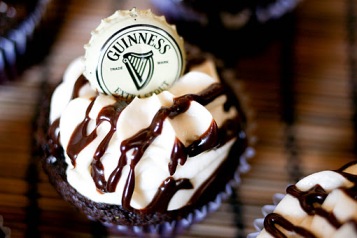 On Une-Deuxsenses‘s blog you can find the step by step recipe to make these delish cupcakes. Check out their site as well as the creicpe below:

To make the cupcakes, preheat oven to 350 F. Line a cupcake tin with liners and set aside. Combine stout and butter in a medium saucepan over medium heat. Add the cocoa and whisk until smooth. Remove from heat and allow to cool slightly. In a large mixing bowl combine the flour, sugar, baking soda and salt. In the bowl of an electric mixer beat together the eggs and sour cream to blend. Add stout mixture and beat to combine. Mix in dry ingredients on low until incorporated. Divide batter among cupcake liner about 2/3 full and bake until an inserted toothpick comes out clean, about 15 minutes. Cool completely.

To make the ganache, place chocolate in heatproof bowl. Heat cream in saucepan until simmering, then pour over chocolate, let sit for 1 minute, then stir until smooth. Add butter and Bailey’s and stir until combined. Set aside until cool and thick enough to be piped (you can use the refrigerator to speed the process but stir every 10 minutes to ensure even cooling). Meanwhile, cut a portion from the center of the cupcake using the cone method and once the ganache is of the right consistency, pipe the ganache into the centers.
To make the frosting, place the butter in the bowl of a stand mixer and beat on medium high until light and fluffy. Gradually add powdered sugar until incorporated. Mix in Bailey’s until smooth. Add more if necessary until frosting has reached a good consistency for piping or spreading. Frost the cupcakes as desired and enjoy! 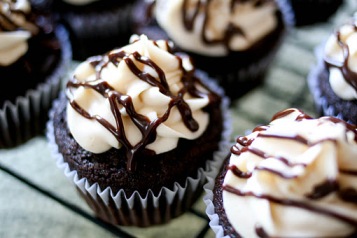