So, it seems to me that I’ve been gone for a quick minute….almost. I’ve been so busy with school and work I haven’t had time to update my blog, BUTTTTTT I have been on Pinterest.

That could only mean one thing….come find me and follow me. I have over 15 thousand pins (I can safely admit I have a problem) and over 42 thousand followers. I have lots of cooking/baking boards as well as drink boards because every one loves a good beverage now and again. Plus there’s lots of other things I love!

I feel like everyone responses well to alcohol related recipes. Courtesy of The Family Kitchen they provide an easy JD Chocolate Cake recipe. Check out their site as well as the recipe below:

1. In a double boiler, or in the microwave, melt butter and chocolate together. Stir well. Let cool.
2. Add butter and chocolate to a large mixing bowl with sugars. Mix until well combined. Add whiskey and mix well. Add eggs, one at a time, until incorporated. Mix well. Add salt, baking soda and baking powder. Mix very well. .
3. Pour into 4 pint jars that have been sprayed well with non-stick spray. Bake at 350 degrees for 30 – 40 minutes, or until cakes pass the toothpick test. (And they have risen and fell)

1. Cream softened butter and shortening in stand mixer with wire attachment.
2. Add sugar. Mix on low until combined. Turn mixer to high. Add a little of the milk or whiskey at a time, until icing is light and fluffy.
3.  Refrigerate until ready to use. 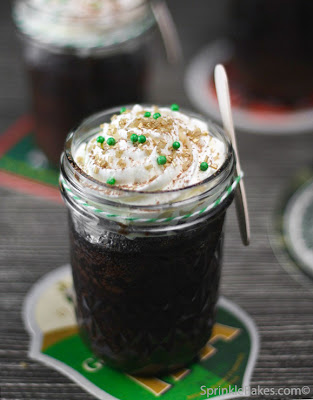 Yes, you read right… Irish Whiskey Cake baked into a Mason jar. I’ve always loved this idea: it makes a great gift and it’s good for those who can’t say no to the second slice of cake *that would be me :)* Courtesy of Sprinkle Bakes they’ve provided photo instructions as well as regular instructions. Check out their site as well as the recipe below:

1. Preheat oven to 325 degrees.
2. Whisk together flour, baking soda and salt in a large bowl; set aside.
3. In a medium saucepan, add coffee, whiskey, butter, cinnamon, and cocoa powder.  Place over moderate heat and whisk until butter has melted.  Remove from heat and add the sugar.  Whisk until incorporated.  Pour mixture into a large bowl and let cool slightly.
4. Whisk together eggs and vanilla extract and gradually pour into chocolate mixture.  Add flour mixture and whisk until just combined.  Mixture will be very thin.
5. Place canning jars on a cookie sheet or roasting pan and pour batter in each by the level 1/2 cups full; OR pour batter into a greased and floured bundt pan.
6. Bake for 45-55 minutes (for both jars and bundt pan).

1. Prepared whipped cream (for jar cakes)
2. When the cake(s) are almost ready to come out of the oven, begin to make the sauce.
3. Combine all ingredients (except whipped cream) in a small saucepan, and cook very gently over medium heat until sugar has dissolved.  Remove from heat.
4. When cake(s) are done, let them cool for 10 minutes.  With a skewer, poke holes in the jarred cakes and pour a little sauce into each cake -dividing it evenly until it has all been used.  Top with prepared whipped cream.

If making a bundt cake, turn the cake out and place it upside down (as it baked in the oven). Poke holes all over the surface and VERY SLOWLY drizzle sauce over the cake until it has completely absorbed all of the sauce.  Wrap in foil and let cool completely.  Store in an air-tight container.

Courtesy of the Brown Eyed Baker‘s blog found this lovely cupcake ;p. Check out their site as well as the recipe below:

1. To Make the Cupcakes: Preheat oven to 350 degrees F. Line 24 cupcake cups with liners. Bring the Guinness and butter to a simmer in a heavy, medium saucepan over medium heat. Add the cocoa powder and whisk until the mixture is smooth. Cool slightly.

2. Whisk the flour, sugar, baking soda and salt in a large bowl to combine. Using an electric mixer, beat the eggs and sour cream on medium speed until combined. Add the Guinness-chocolate mixture to the egg mixture and beat just to combine. Reduce the speed to low, add the flour mixture and beat briefly. Using a rubber spatula, fold the batter until completely combined. Divide the batter among the cupcake liners. Bake until a thin knife inserted into the center comes out clean, about 17 minutes. Cool the cupcakes on a rack.

3. To Make the Whiskey Ganache Filling: Finely chop the chocolate and transfer it to a heatproof bowl. Heat the cream until simmering and pour it over the chocolate. Let it sit for one minute and then, using a rubber spatula, stir it from the center outward until smooth. Add the butter and whiskey and stir until combined. Let the ganache cool until thick but still soft enough to be piped.

4. To Fill the Cupcakes: Using a 1-inch round cookie cutter (or the bottom of a large decorating tip), cut the centers out of the cooled cupcakes, going about two-thirds of the way down. Transfer the ganache to a piping back with a wide tip and fill the holes in each cupcake to the top.

5. To Make the Baileys Frosting: Using the whisk attachment of a stand mixer, whip the butter on medium-high speed for 5 minutes, scraping the sides of the bowl occasionally. Reduce the speed to medium-low and gradually add the powdered sugar until all of it is incorporated. Add the Baileys, increase the speed to medium-high and whip for another 2 to 3 minutes, until it is light and fluffy.

6. Using your favorite decorating tip, or an offset spatula, frost the cupcakes and decorate with sprinkles, if desired. Store the cupcakes in an airtight container.